You are here: Home / Playing Trombone 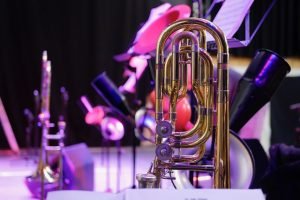 If you have read my story, you will know that I used to play the trombone. However, round about 1993 I put the trombone away and retired that part of my creativity.

A couple of decades later I have rediscovered my passion for playing the trombone, mainly thanks to being able to get together with fellow musicians of all ages in the Flixton Community Band. Also, I had been watching a few YouTuber trombonists and got the final push to give the trombone a blast again when I saw the Flixton Community Band playing in Urmston and realised they were looking for players. I joined them in March 2017 and dusted off my old trombone from the loft to do a bit of practice. During my first few attempts I could not even get a note out of it, but I persisted and gradually improved over the first few months and have enjoyed the relaxed nature of the Flixton Community Band.

In September 2017, I heard from John, an old friend/trombone colleague on Facebook. He was still playing in the Ashton-on-Mersey Showband, the band I played in for 7 years prior to me leaving in 1993. John said they were looking for trombonists and asked if I was interested. I said I was and I am now enjoying reconnecting with old friends and have played a few gigs with them too.

This page will be where I add information regarding my trombone journey 2.0

It is just a hobby right now, but I aim to use the trombone skills in some future music productions.

Bands I currently play in:

Everyone loves a freebie. I try and offer a reasonable amount of free content alongside my paid-for content and services.Free MusicFree PhotosBlogs & ArticlesInstrument Tuition

I am also an audio producer and work with voiceovers on multimedia projects and I build WordPress websites too. Audio ProductionVoice OversWordPress WebsitesPodcast Recording